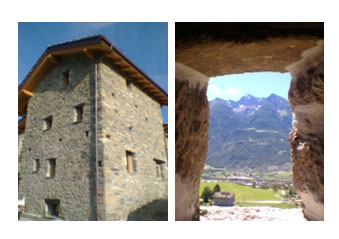 La Luge, some notes of its history

In the High Middle Ages, this house was probably a watchtower along the Consular Road to Gaul on the way towards the Great Saint Bernard Pass. The garrison controlled the passage of travelers who avoided the city of Aosta, gaining gradient in climbing on the left side of the Dora Baltea river and the Buthier torrent towards Roisan, continuing along the Artanava river valley towards the villages of Doues, Allein, Etroubles, Saint Oyen, Saint Rhémy and finally the Great Saint Bernard Pass. La Luge has a quadrangular shape with a side of 7 meters. This is an evidence of its function as the rests of the Roman arch (partially in the northern side of the house), the stairway to the attic and the windows on the first floor and in the attic, which were embrasures used to warn and defend the inhabitants. Around 1200, under the rule of the Lords of Quart and the construction of the irrigation canal in the lower side of the building, the entrance was moved from south to west to allow the passage of the waterway, now closed in a pipe network. A cross patonce on the wooden beam on the bottom of the portal of the cellar facing the entrance staircase bears witness of this event. There are symbols on the beams of the entrances, the symbols of the House of Savoy and the "T" of the Tillot family from Montjovet who used the structure for housing and agricultural needs. In 2013, after a long period of inactivity, the structure was restored and renovated by the current owners Angela and Gino and, from January 2015, is used as a holiday home.